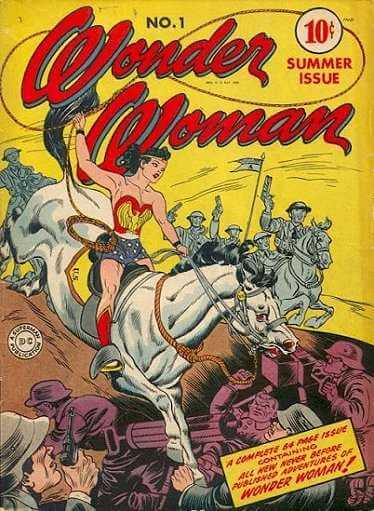 Three of the oldest and most historically important Wonder Woman comic books —including issue No. 1- are being auctioned off on eBay.

The comics being auctioned (separately) are Wonder Woman No. 1, Sensational Comics No. 1, and All Star Comics No. 8, all featuring some of the earliest representations of Wonder Woman.

For this one of a kind, historic auction, Frooition designed a unique custom listing design. The listing design is inspired by the DC comic’s artwork and their iconic depiction of the progressive heroine. The copy of the first issue of Wonder Woman was originally sent to Harper’s Magazine. The magazine was filed away in a cabinet and forgotten, preserving it in pristine condition. The other two comics in the auction were bought from a collector.

The comics, all of them more than 75 years old, are in exceptionally good condition. The copies featured in this sale are the highest-rated editions ever found according to CGC, a vintage comic assessment organization. (They got ratings of 9.0 or higher out of 10, meaning very fine or near-mint condition.)

Interest in Wonder Woman-related items on eBay has spiked since the character’s recently released feature film. According to a news release, sales of Wonder Woman related items have increased by 50 per cent over the past year and include comics, Lego sets, costumes and even Wonder Woman-branded fidget spinners.

Wonder Woman is one of the most widely known and loved characters of all time, so these extremely rare comics would likely fetch high prices regardless of the timing. The Wonder Woman comics are on sale from comics shop owner Darren Adams. Adams sold a 1338, 9.0 rated copy of the first Superman comic in 2014 for a historic $3.2 million on eBay, and the Wonder Woman comics are expected to achieve a similar price. A portion of the proceeds will go to Trafficking Hope, an organization that works to combat human trafficking.

Watch the video below to hear more about the origins of Wonder Woman, and the story of this incredibly rare find.