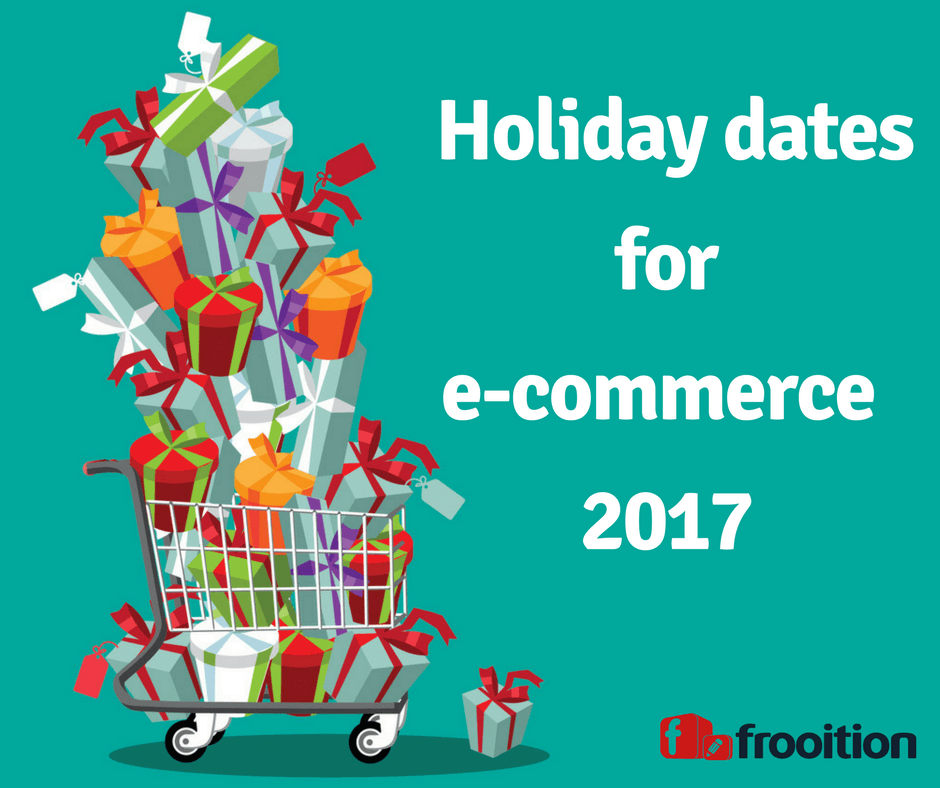 During the five day period from Thanksgiving through Cyber Monday in 2016 consumers spent a total of $12.8 billion online in the U.S, according to Adobe Digital Insights. That represents a 15% increase over 2015. Nevertheless, that figure pales compared to the $17.8 billion spent online on China’s 2016 Singles Day on November 11th 2016.

What follows are day-by-day breakdowns of the major e-commerce holiday dates as well as emerging trends.

Halloween has been increasingly growing in financial importance year on year and even more so in the UK. In 2016, it was estimated to be worth £466m for the UK alone, thanks to the purchasing of costumes, food, and decorations. Mintel recently reported that Halloween did, in fact, overtake the spend for Valentine’s Day.

Even if your business doesn’t have a direct link to the day it could be worth adding some Halloween-themed offers to your shop.

Veteran’s day is a day to honor military veterans who have served in the US armed forces. Show your appreciation by offering special promotions and discounts exclusively to veterans.

What started as a shopping day for single people in China has now become a massive online retail event. $17.8 billion spent online on 2016 Singles Day. Why not start a promotional offer for singles or focus your campaigns on the benefits of shopping early to kick off your holiday sales?

Last year, consumers spent $1.93 billion online during Thanksgiving in the U.S. Traditionally one of the biggest days in retail, the 2016 revenue was less than experts had predicted, probably due to many customers taking advantage of early promotions the day before, as well as deep discounting on the day itself.

Thanksgiving Day had its best ever results on mobile, with a record $449 million in U.S. revenue, according to Adobe Digital Insights. Likewise, ChannelAdvisor reported that smartphones accounted for nearly 70 percent of Thanksgiving Day traffic, with tablets contributing another eight percent. ChannelAdvisor said that for the first time, mobile e-commerce orders surpassed desktop orders, with 53 percent of all orders on Thanksgiving Day completed on a mobile device.

Black Friday was originally an American shopping holiday, though as e-commerce has grown, the phenomenon has spread to become an international event. It is typically seen as the start of the Christmas shopping season and so is a good benchmark for you to ensure that your website is fully prepared for Christmas shoppers.

Interestingly, Black Friday 2016 was the first day to generate more than a billion dollars in online sales from mobile devices, according to Adobe. The $1.2 billion spent via mobile devices was an increase of 33 percent from the previous year.

Here are a few good ideas that you can use to boost your traffic and conversions on Black Friday:

Over 130,000 tweets were sent on the day itself reaching more than 120 million people, with Small Business Saturday UK trending at number one in the UK and at number 5 globally.

80% of Local Authorities and hundreds of MPs supported the campaign.

These statistics are expected to rise drastically in 2017.

After the madness of Black Friday and Cyber Monday, and with December upon them, customers are in full gift buying mode.

Traditionally a high-spending time of year, people are doing more of their Christmas shopping online and 2016 figures beat those of the previous year by a considerable amount. According to figures from the ReD (Retail Decisions) at 13:34 on Monday 7 December shoppers spent a massive £1.4 million in one single minute on online shopping. Dubbed Manic Monday, this was an increase of 61% from the same minute in 2015, and during the hour from 13:00, sales hit their highest peak of £33m, which was 21% higher than the previous year.

Mondays are known to be strong online shopping days throughout the year, and during the holidays this notion is even more pronounced. Cyber Monday is the obvious driver of the trend, but Green Monday is now the third biggest of the e-commerce holiday dates, and should not be overlooked.

The name “green Monday” refers to the color of money; not the environment, and was coined by eBay to describe its best sales day in December, usually the second Monday of December.

Buying Christmas presents late has become part of the festive tradition. Gone are the days where people had finished buying presents before they had flipped their calendar to December – your customers will still be shopping for their gifts about 10 days before Christmas.

The idea behind the event, aside from being another way to attract customers during the busiest e-commerce season of the year, is to guarantee free shipping before Christmas Eve.

The deadline for guaranteed delivery by Christmas should be well-advertised on your site so your customers have a deadline for their orders.

Implement a countdown clock on your landing page, allow website visitors to sign up for reminder emails or place clear reminders during the checkout process to relay a sense of urgency in placing a timely order.

We’ve all been there; It’s the day before Christmas, and you’ve already wrapped up all your gifts, only to realize that you completely forgot one person’s gift.

Knowing this, deploy a few campaigns towards the end of the month featuring your digital gift cards. Your customers will thank you.

Consumers spent 91 billion in the run to Christmas in 2016 and e-commerce sales grew by 11% compared to last year. It might be an obvious one but be organized and prepare yourself and your business for one of the busiest times of year for commerce.

Be sure to maximise your sales by combining Christmas themed banners and ads with strong CTA’s that will really draw in your customers. You should be doing this at least 6 weeks before the 25th December.

This year’s holiday period is set to be the biggest ever for e-commerce. With thorough preparation, you can ensure that this holiday season is your most profitable yet.