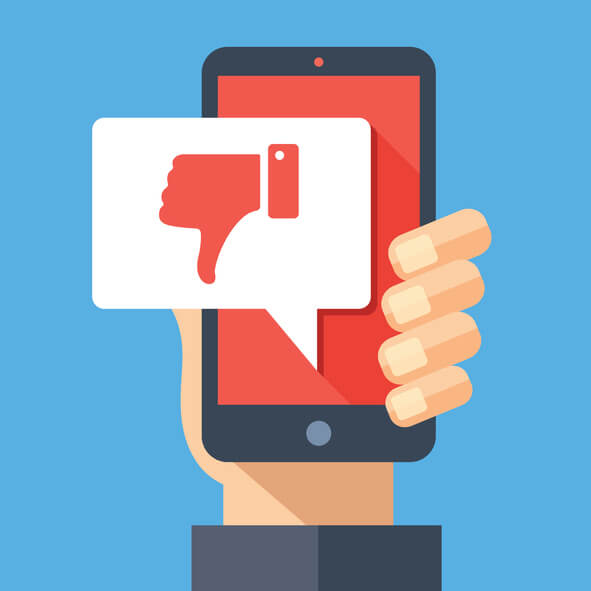 Speak as a human

Nothing escalates an angry complaint like corporate blurb or a hollow cut and paste reply. At best it seems dismissive, at worst, passive aggressive. People can detect when they are getting a genuine reply, and when they are being fobbed off. Be polite, personable and genuine. Giving your name is a small detail that can help to give reassurance.

This can often be the hardest part, but it is vital to remain calm. Customers will often be very aggressive and angry in an initial complaint, because they feel it is aimed at a faceless organization. When they receive a calm and genuine reply from a person, their anger often disperses. It is good to try and remember that others will see this exchange as an example of your service. To customers witnessing the conversation, the complaint becomes less important than the handling of it.

Know when to speak up

There may be occasions when a person on social media is being overtly abusive, unreasonable or is just clearly looking to argue. If your social listening picks up on comments of this sort, it is probably best to move on. Commenting on an inflammatory post that is not seeking any solution would only draw attention to it, when it would have probably gone unnoticed otherwise.

Deal with it quickly

Time is not on your side in this situation. The more quickly and efficiently a complaint is addressed, the better. Even if you can’t do anything about the complaint straight away, let the customer know that you are looking into it and will get back to them.

When a customer writes something negative, it is natural to want to take the exchange straight to private messages. However, this prevents other customers from seeing how quickly and efficiently you dealt with the problem.

When Amazon removed un authorised copies of books from people’s kindles without notifying them, the internet exploded with furious customers. But when Amazon’s CEO Jeff Benzos publicly apologised online, many applauded his bravery and were very forgiving. A huge PR catastrophe was saved by one man stepping forward to give a heartfelt apology.

Similarly, when United Airlines recently faced a social media ring of fire after a video of a passenger being dragged off a plane went viral, their CEO Oscar Munoz stepped forward to give a statement. Munoz did not make a full apology like Benzos though. Instead, he chose to defend the actions of United Airlines staff and blame the passenger for being “disruptive and belligerent.” This statement only add fuel to the social media blaze. The airline was being savaged by the media and stock value was taking a nosedive. Munoz released a second, far more humble apology;

“This is an upsetting event to all of us here at United. I apologize for having to re-accommodate these customers. Our team is moving with a sense of urgency to work with the authorities and conduct our own detailed review of what happened.”

This is perhaps more in line with what Benzos would have released the first time, had he been in Munoz’s shoes. It is apologetic, sincere, and professional. It promises action and the possibility of future solutions. But after Munoz’s initial strong defence of his airline’s actions, it was met with scepticism. Unfortunately for Munoz and United Airlines, a well written defence is no substitute for a heartfelt apology. Always assess a situation fully before making a strong public statement.

We all make mistakes. It is how we try to fix them that people remember. Whether it is a refund, and alternative product or an apology, always offer a solution to the customer’s problem.